Not many people can confidently describe themselves as “passionate, driven, creative, imaginative and inspiring”, but American entrepreneur and CEO of Airbnb Brian Chesky is one of them. At the young age of 35, Chesky has already made Time’s list of Most Influential People (2015), as well as Forbes’ America’s Richest Entrepreneurs under 40. Growing up in New York, he was interested in landscape architecture and design, attending the Rhode Island School of Design (RISD). While at RISD, he met future business partner Joe Gebbia, who he went on to co-found Airbnb with.

After graduating college, Chesky moved to San Francisco where he lived with Gebbia. It was during this time that the idea of hospitality exchange service Airbnb was born. In late 2007, San Francisco was host of the Industrial Designers Society of America conference and subsequently all hotel rooms were booked out. In a time of financial hardship, the duo decided to rent out air mattresses in their apartment for extra cash, naming the venture ‘Airbed and Breakfast’. Commenting on the humble beginnings, Chesky said, “We didn’t mean to start a business, it just sort of happened. There was no flash of genius – in the beginning we didn’t realise that this would be the big idea. It was the thing that would pay rent until there was a big idea.” Gradually it became evident that this was the big idea, so they expanded from beyond their apartment and renamed the company ‘Airbnb’.

In 2008, Harvard graduate Nathan Blecharczyk became the third co-founder of Airbnb. This changed the dynamics of the company, with each co-founder assuming a role – Chesky’s was leader and CEO. After an innovative entry into the Y Combinator seed-funding program, the trio was accepted and began internationalising with several offices in Europe. By 2014 Airbnb was a huge success – Chesky announced that during the 2014 FIFA World Cup more than 120,000 people had stayed in Airbnb homes. Today, the site has helped people book “more than 1 million nights in more than 9,000 cities in 176 countries around the world”. 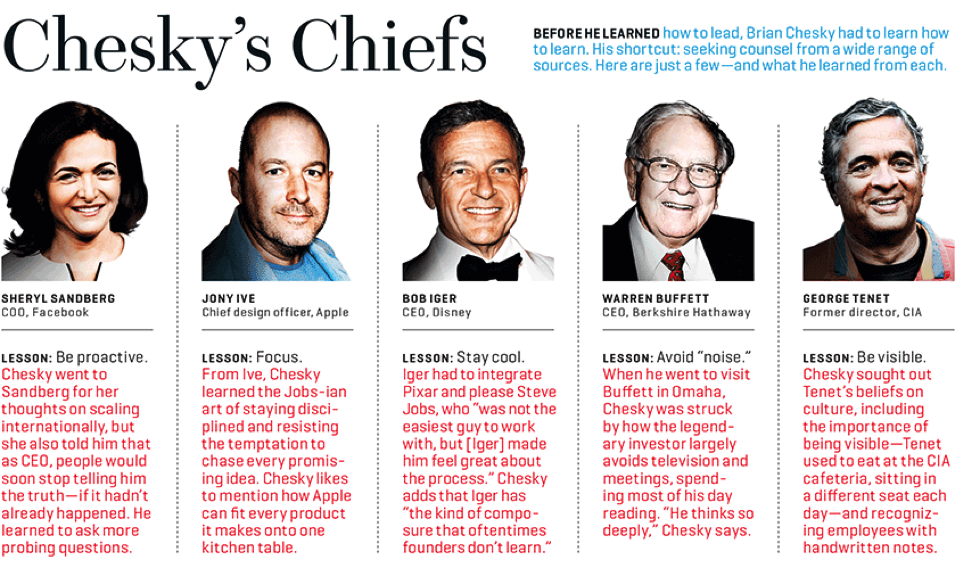 During his journey in business, Brian Chesky has consulted and learnt from a range of successful businesspeople including Sheryl Sandberg, Bob Iger and Warren Buffett (above). When asked to provide advice to other entrepreneurs he told Grey Lock, “Choose a good co-founder. Develop deep, personal relationships with people who share your values and yet also have a lot of the skills you don’t have”. He also explained, “Nothing happens at first. You get 90% of the results in the last 10% of the time.” Among a suite of other awards and recognitions, President Obama named Chesky an Ambassador of Global Entrepreneurship in 2015. It is clear that Brian Chesky has achieved great things as CEO of Airbnb, and that he is not slowing down anytime soon!

Like many, Brian Chesky started with a lack of funds and an idea, and this has developed into a billion-dollar business. I am interested though – what do you find most interesting about this journey? Comment your views below to join the conversation.

This article was written by Laura Hutton on behalf of the Australian Institute of Business. All opinions are that of the writer and do not necessarily reflect the opinion of AIB. The following sources have been used to prepare this article: Wikipedia; Grey Lock; Fortune; Success Story