As the world’s largest professional online network, LinkedIn has truly cemented itself as a leader in social media. Founded in 2002 by Reid Hoffman and team members from PayPal and Socialnet.com, the platform has gone on to operate in over 200 countries around the world. After five months of work, the site officially launched on May 5th 2003 and attracted 4,500 members after its first month in operation. Today, there are more than two professionals signing up per second, totaling over 380 million members worldwide.

For those of you who aren’t familiar with the platform, LinkedIn is a social networking site designed specifically for the business community. It exists for members to establish networks of people in a professional sense, and essentially acts as an online resume. Each profile page emphasises employment history and education, with other features such as skills and recommendations in the mix. Like Facebook and Twitter, you can connect with colleagues and extended networks to become ‘connections’, allowing users to see each other’s information. Basic membership is free, however there is a paid option known as ‘LinkedIn Premium’ which allows users to access additional contacts in the LinkedIn database. In 2012, co-founder Allen Blue explained that LinkedIn’s role “has always been to help every professional find a job that they love and be great at it”.

The current CEO of LinkedIn is Jeff Weiner, a previous Yahoo! Inc. executive. Founder Reid Hoffman was the previous CEO, but is now Chairman of the Board. While headquartered in California, LinkedIn boasts offices in 30 cities around the world from New York to Dublin, Singapore and Sydney. It is clear that LinkedIn has experienced tremendous growth over the past few years – in 2015 the company reportedly had more than 7,600 full-time employees, which is over three times more than their 2012 figure of 2,100. While originally funded by the group of co-founders, Sequoia Capital, Greylock, Bain Capital Ventures, Bessemer Venture Partners and the European Founders Fund now fund LinkedIn. Despite such growth from the beginning, it did however take the platform three years to reach profitability. 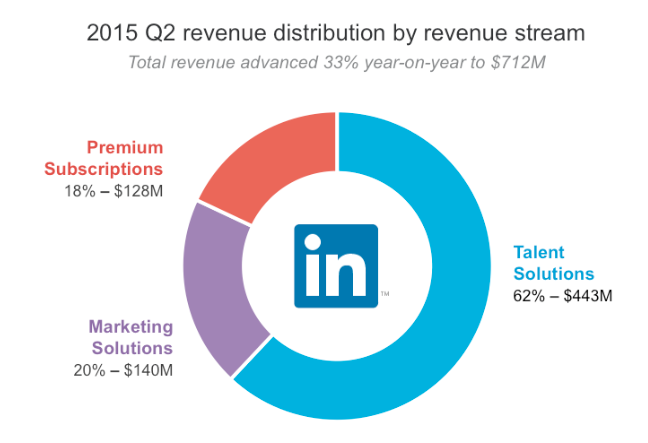 Since profitability, LinkedIn has continued to grow, and is currently available in 24 languages. While it seems there has been smooth sailing, like every organisation they have faced their challenges. In 2012 the site fell victim to a hacking attempt, resulting in 6.5 million hashed passwords being leaked. Prior to that, it was revealed that LinkedIn’s application was collecting data from users’ devices without permission from the user, causing significant uproar. Despite a couple of bumps in the road, revenue remains strong with $2.21 billion generated in 2014, and $712 million in quarter 2 of 2015. Interestingly, the above chart shows that the majority of LinkedIn’s revenue is generated by Talent Solutions, rather than subscriptions.

LinkedIn has had a remarkable journey from start-up to billion-dollar organisation, but what do you admire most about their work? I am interested to hear what you think about the platform overall, as well as any other organisations you’d like to see profiled on the blog. Comment below and join the AIB conversation.

This article was written by Laura Hutton on behalf of the Australian Institute of Business. All opinions are that of the writer and do not necessarily reflect the opinion of AIB. The following sources have been used to prepare this article: LinkedIn; LinkedIn About Us; Wikipedia; The Next Web, and Huffington Post