Why Netflix Is The Ultimate Digital Disruptor

When it comes to success stories in business, we often hear how the adoption of new technologies was the key to significant growth. The phrase ‘innovate or die’ can come across as quite harsh, but in today’s competitive business world, it does have some merit. Over the last two decades, technology has completely changed the way we do business, seeing the collapse of some of the world’s most well known brands, and the rise of many that were not expected to succeed.

Before technology was even a major player, Harvard Business School Professor Clayton Christensen popularised the term disruptive innovation through his 1997 book. He described the term as, “a specific way that smaller companies can outcompete and eventually destroy their bigger rivals.”  This term is now more relevant than ever, with start-ups achieving exactly that (and more) through advances in digital technology.

Former IBM executive for start-ups, Sandy Carter, shared a slide that gained much traction at an IBM for Entrepreneurs event in 2016. Titled, ‘The Digital Disruption Has Already Happened,’ the slide detailed the following eight examples: 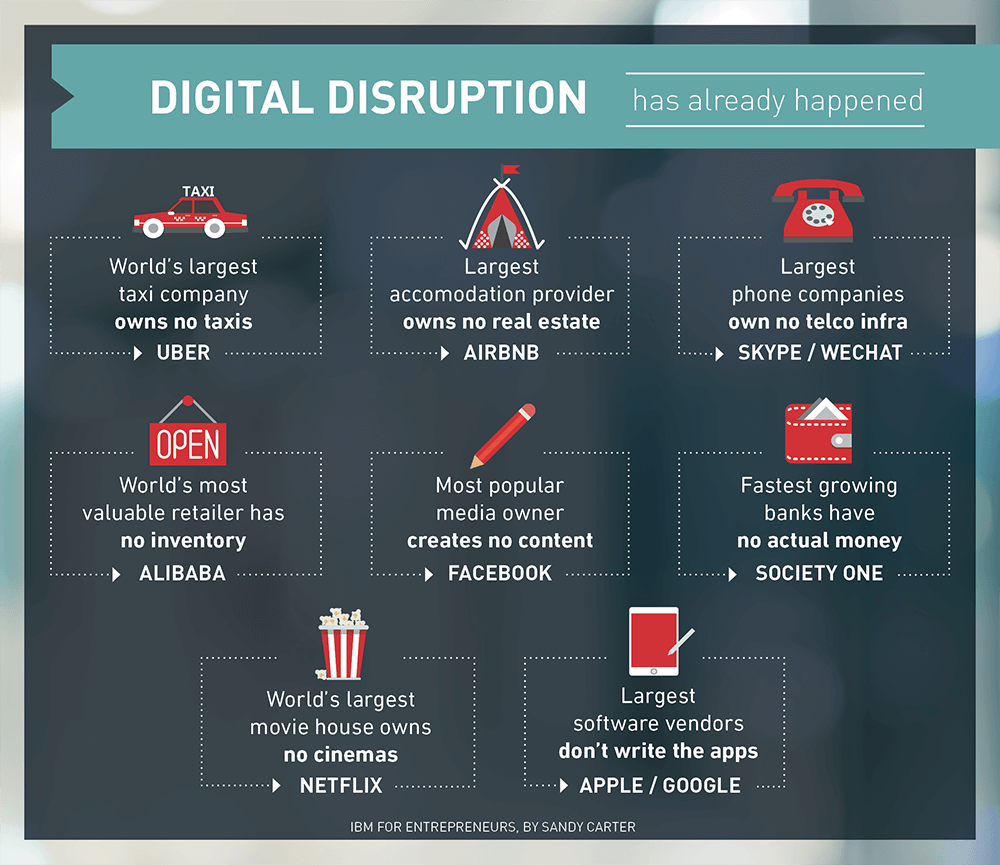 Significant focus on online streaming services in 2017 leads us to profile lucky number seven – subscription-based movie and TV streaming service, Netflix. Netflix is considered the first major disruption to the television and movie industry, as the on-demand platform offers an inexpensive alternative to traditionally expensive cable TV services, using the internet – anywhere, anytime. The Sydney Morning Herald describes the television economy as a deeply transactional model – people create things, they sell them, and others buy them and then watch them.

Interestingly, a recent Roy Morgan Research study found that the introduction of mainstream streaming services has expanded the overall market in Australia, rather than only luring customers from Foxtel. While Foxtel’s subscriber base has continued to grow, on-demand subscriptions largely driven by Netfilx have now overtaken Foxtel’s market share.

But Netflix started as a website where people could rent DVDs through the mail, serving as a small competitor to bricks and mortar movie hiring shops such as Blockbuster. In the early days as a postal business, it innovated through embracing options as they became available, such as express post. This willingness is what led Netflix to become the digital disruptor that it is today. With the rise of online streaming, Netflix jumped on board and was able to knock traditional movie shops out of the game thanks to a wider selection, all-you-can-watch, convenient and low-cost approach.

“The reason why disruptive companies are often able to rise so quickly is that their larger competitors overlook them,” Professor Clayton Christensen said. In the initial stages, Netflix and Blockbuster weren’t competing for the same customers, with Blockbuster even refusing to acquire Netflix for $US50 million in 2000. Video streaming wasn’t a new idea when Netflix embraced it, but it was their existing customer base that got them over the line. In Blockbuster’s case, they were too late. Today, streaming services continue to attract more and more subscribers due to the key selling points of the service. In addition to being more affordable, services such as Netflix allow consumers to watch when they want, rather than having to plan ahead of time to watch or schedule a recording.

In the United States, the use of Netflix and other streaming services has taken off, with over half of all American households subscribing to at least one of the options. According to CBNC, Americans spent $420 billion on subscriptions in 2015, up from $215 billion in 2000. In Australia, Netflix also dominates, with services such as Stan and Presto occupying a smaller portion of the market share. Foxtel has recently released Foxtel Play, a streaming service offered at a more affordable price, but like Blockbuster is late to the game.

Perhaps the key point of difference that Netflix boasts as a digital disruptor is the fact it has started to create its own content – demonstrating the company’s extraordinary reach. Netflix CEO Reed Hastings considers the internet as the first global distribution channel for movies and TV. “It allows a company like Netflix to produce shows locally and distribute them around the world,” he said. In pitching to producers around the world, Netflix can offer, “the chance to launch a show simultaneously in 190 countries to 81 million viewers,” – something that cable TV providers and movie stores could never offer due to constraints in both budget and technology.

In 2016, Netflix released 600 hours of original programming – a number that is continuing to grow rapidly. As a company, it is focused on developing content in as many local languages as possible, attracting users from around the world. Hastings and Netflix believe this strategy is one of the keys to its future, though the plan doesn’t come without its critics.

The rise of Netflix has also forced both the TV industry and internet providers to rethink their approaches with customers. It wasn’t until recently that all mainstream TV had to be consumed on a television at a programmed time. Now, free-to-air television in Australia is offering services such as 7-Plus and 10-Play, allowing consumers to catch up on a television show on their mobile device at a time convenient to them. Internet providers such as Telstra have also changed up their business model when it comes to data offerings, with many providers now offering unlimited internet data at lower prices, so services like Netflix can be consumed with no roadblocks.

While Netflix clearly takes the lead currently, Hastings acknowledges that other digital disruptors could be on their way. “It’s a race, but there are going to be many winners,” he said. “If you can build an iPhone app, you can start a TV channel. We are going to have to see how that plays out.” He also acknowledges that while cable TV users are declining, they still have a significant market share and are not to be under-estimated. Like America, Australia now has even more  streaming options with the recent Australian launches of Amazon Prime and Google Red.

Future plans for Netflix include growing the same level of adoption internationally that they’ve received in the United States. The thing with digital disruption is, businesses can’t foresee how they will use technology, as much of it hasn’t been invented yet. Hastings said, “It’s not Netflix that’s making the changes. It’s the Internet. We’re figuring out every year how to use the Internet to make a great consumer experience. Every year is an experiment.” Given the pace in which Netflix and other streaming services have disrupted the entertainment industry in the past five years, it is set to be a thrilling next five years.

Subscription and free-to-air TV will face challenging times in 2017, but I’m interested to see how the battle plays out.  I’m keen to hear from readers about digital disruptors in general, whether it’s big names such as Uber and Netflix, or perhaps your own business. How do you think the business environment will change with technology over the next few years? It’s an amazing time to be in business, with more and more options at our fingertips.

This article was written by Laura Hutton on behalf of the Australian Institute of Business. All opinions are that of the writer and do not necessarily reflect the opinion of AIB.  The following sources were used to compile this article: The Economist, Investopedia, Business Insider, Bandt, Silicon Republic, Business Insider, CBNC, Sydney Morning Herald, Roy Morgan