Cognitive bias affects us all. No matter how rational or objective we believe ourselves to be, we make mistakes in reasoning, evaluating, recollection and other cognitive processes, usually as a result of holding onto our preferences and beliefs regardless of contrary information.

It’s important to understand that we can’t avoid cognitive bias. Because it’s so often unconscious, merely telling ourselves to do better won’t solve the problem. What’s needed are systems that can be put in place to reduce the impact of cognitive biases in play.

Here are four of the primary biases that can have an impact on how you lead your team and the decisions you make.

Affinity bias relates to the predisposition we all have to favour people who remind us of ourselves.

When applied to regular workplace processes such as hiring and promoting, at its best, this bias sees successful people willing to give someone a chance because of their similarities. We’ve all heard or read the phrase, “You remind me of myself at that age,” and understand how that kinship can result in favourability.

But in the most common occurrences of affinity bias, unfortunately, demographic minorities end up disadvantaged. Without meaning to, a leader who is Caucasian and male will be more likely to hire people who remind him of himself. Even when men consider themselves egalitarian and have no stated prejudice against other groups, studies show that affinity bias occurs. That’s because it’s happening on a subconscious level, and the hirers are not conscious of why they’re making the decisions that they are.

Hiring practices that can help with this problem include ‘blind screening’, where the candidate’s application is stripped of personally identifying data. While that’s been proven to help, it only addresses the initial hire. Promotions, pay-rises and intangible opportunities to train or network are harder to find workarounds for.

Confirmation bias is our human tendency to seek out or notice information that supports our existing beliefs. It can be a problem for leaders, who need to be open to feedback, solutions and ways of doing things that they may not have favoured in the past.

If you’ve already made up your mind that a certain path forward is the correct one, confirmation bias will have you valuing the evidence that supports your plan more so than information that does not. You could disregard useful feedback, dismiss innovative ideas and solutions, and ultimately make the wrong decision for your people and the company.

To combat confirmation bias, when you’re about to make a decision, look for ways to challenge what you think you see. Seek out information from a range of sources and discuss your thoughts with a diverse group of people. Then, share the feedback you get with a wider group again for greater discussion. For major decisions, even consider assigning someone on your team to play devil’s advocate. 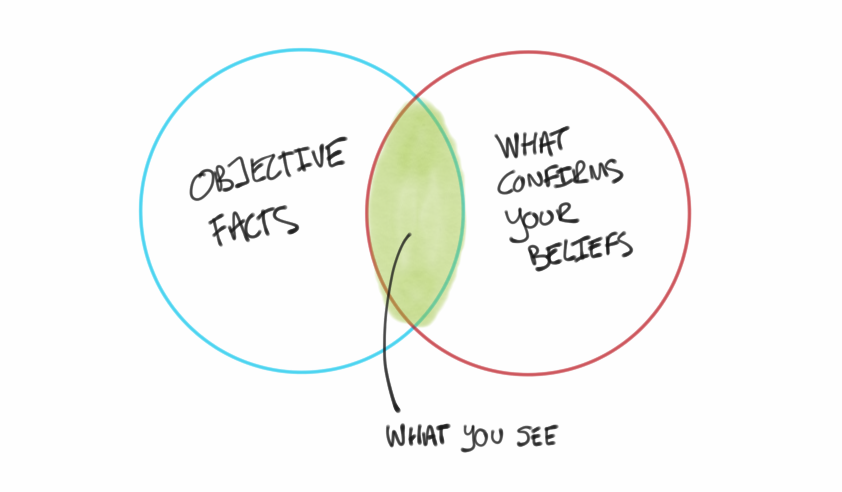 Similar to affinity and confirmation bias, conservatism bias sees us favour familiarity. In this case, it’s favouring existing information over new information that threatens to change our preconceptions. When we do get new information, we tend to weight it less heavily or dismiss it, while information that supports a previous belief is given more weight.

While it seems laughable to us now that it was once believed the earth was flat, convincing people otherwise was a slow and hard-won battle.

For leaders, conservatism bias can make change management particularly challenging. Even where there are compelling reasons to change a business system, introduce new processes or modify roles, people are likely to cling to the old way of doing things. They’re not just being stubborn – they literally aren’t seeing the new information as important. As a leader, understanding this trait will make guiding your people through change easier on you all.

Related read: Why Emotional Intelligence is the Most Valuable Professional Asset

Fundamental attribution error refers to our tendency to believe that what people do reflects who they are. This bias sees us overemphasising personal characteristics and ignoring situational factors when judging others’ behaviour.

As leaders, the tendency to assume that someone’s behaviour is a part of them and unchangeable is extremely limiting. It prevents us from being able to look at their external situation and make changes to improve things.

A habitually late employee could be lazy and unmotivated, or they could have caring responsibility at home. In the latter case, the ability to start later in the day or work from home when needed could see their productivity soar. If you’re inclined to blame your staff for something you perceive as a character flaw, take a step back. Ask yourself what other possible explanations there might be for their behaviour, and then approach the solution in good faith.

Have you noticed any cognitive biases at play in your industry? As a leader, how do you ensure you’re as fair as possible?

This article was written by Tanya Ashworth-Keppel on behalf of the Australian Institute of Business. All opinions are that of the writer and do not necessarily reflect the opinion of AIB. The following sources were used to compile this article: The Guardian, Business Insider, New York Times, Monash University, The Conversation and Harvard Business School.

Indeed informative and an insightful article ..however people in a position of power do not like to be challenged when they off track.. raising the issue could is always detrimental to the individual

Nice you highlighted these four, however I feel there is more the story of bias. Affinity bias does exist and so does the opposite, which I may call as longevity, where a leader may want to be in a certain position forever. This form of bias is not good for the organization as an employee looks like has similar competency may be seen as a competitor to the leader. This can easily be seen in the realm of politics. Not to sure how this bias can be discouraged in the work place.