The Daily Mail once wrote of Anita Roddick that “Her impact is obvious everywhere in the marketplace. The lines once separating green marketing from green operations have blurred, as corporations have awoken to the fact that sustainable and more transparent operations might positively impact profits. Arguably, many of these green initiatives have their origins in promotions embraced most fervently by Dame Anita”. It’s a legacy to be proud of.

Dame Anita Roddick, 23 October 1942 to 10 September 2007, was one of the first people to bring ethical consumerism into the mainstream consciousness. She is best known for creating The Body Shop, which she transformed from a modest start-up in 1976, to an internationally famous brand which she sold to L’Oreal for the equivalent of $312 million in 2006.

Born Anita Perilli, she started life in a quiet English seaside town and was the child of Italian Jewish immigrants. Roddick trained as a teacher at the Bath College of Education, but when she landed an educational opportunity on an Israeli kibbutz, she decided instead to keep travelling and broadening her mind. On her return to England, she met her future husband Gordon Roddick, and they were instantly inseparable. They married in 1970 when Roddick was 28.

Showing the dynamism that characterised their lives, the Roddicks opened a restaurant and then a hotel together, at the same time as starting a young family of their own. In 1976, Gordon left his family to pursue an idiosyncratic dream of his own, to ride a horse from Buenos Aires to Washington DC. The couple rented out their restaurant, took out a $6,500 loan and, while Gordon was away, Anita began The Body Shop.  It was an immediate success: by the time Gordon came home, eleven months later, a second outlet was already up and running. By the end of 1982, The Body Shop was opening outlets at the rate of two per month.

Roddick consistently attributed some of her success to luck and good timing. The green paint inside the shop, for example, which became an iconic symbol of ethical and environmentally conscious companies, was chosen to cover the greenish patches of damp on the walls.  Customers were invited to choose from an array of perfume oils to add to their purchases, which were sold un-fragranced, because it was cheaper than adding expensive scent to each bottle.  Without a budget for advertising, Roddick relied on in-person interviews and word of mouth, which lent the business an air of authenticity and credibility that tied in with the ethical image. She also took the revolutionary approach of admitting that beauty products wouldn’t make one beautiful; instead, she played up the sensuous fun of the beauty industry, and the feminist 1970s consumer loved it. 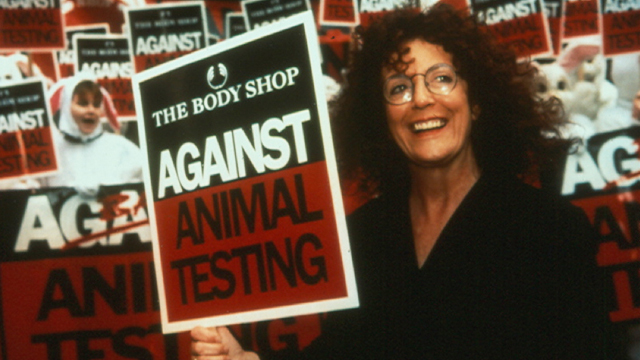 In 1984, The Body Shop went public, doubling its stock in the first day and continuing to rise throughout the eighties. Roddick’s leadership, as well as her involvement in social and environmental causes including Greenpeace, Amnesty International and anti-animal testing, gave The Body Shop a unique brand. Buying Body Shop products made people feel good about themselves, and the company thrived. In 1988, Roddick received an OBE, subsequently becoming a Dame in 2003 for ‘services to retailing, the environment and charity’.

By the 1990s, however, the company’s meteoric success was faltering. Competitors were moving into the ethical beauty space. Roddick was launching environmental products instead of refreshing the product line, and they didn’t sell. Eventually, in 1996, both Gordon and Anita stepped back and hired a new managing director to reposition the company. Roddick herself redirected her energies more and more towards charitable causes. She founded the Roddick Foundation (originally the Anita Roddick Foundation) in 1997, which continues today and has funded innumerable causes across the world.

The Body Shop continues to be a major player in the ethical beauty market to this day. However, in 2006, beauty giant L’Oreal bought the company for $312 million, sparking outrage amongst consumers that felt Roddick had sold out. Roddick herself defended the move, describing herself as a ‘Trojan Horse’ who could effect change within L’Oreal through the relationship. Tragically, she was running out of time to prove her ambition.

In 2004, Roddick was diagnosed with Hepatitis C, which she had contracted unknowingly in 1971 after an infected blood transfusion during her youngest daughter’s birth. Already in its advanced stages by the time it was diagnosed, the disease was incurable, and Dame Roddick died in September 2007 after a brain haemorrhage. She remained socially active until close to her death, acting in the cause of the Memphis Three as well as working with the Hepatitis C Trust in Britain to improve understanding of the disease. When she died, it was discovered that she had left no estate, having donated her entire fortune to charitable causes. More valuable still, she left the lesson that you can run a successful business along ethical lines, as long as you believe enough.

This article was written by Tanya Ashworth-Keppel on behalf of the Australian Institute of Business. All opinions are that of the writer and do not necessarily reflect the opinion of AIB.