When Yvon Chouinard isn’t at Patagonia, his successful outdoor clothing company, you’ll be sure to find him in the great outdoors. Chouinard, now 79, has devoted his life to outdoor activities and environmental activism, and the success of his company is inextricable from those aims.

“If I had to be a businessman,” Chouinard wrote in his book Let My People Go Surfing: The Education of a Reluctant Businessman, “I was going to do it on my own terms.” That he’s certainly done, amassing a fortune estimated at $US1 billion.

Chouinard was born in Lewiston, Maine, in 1938 to French-Canadian parents. His father had only three years of schooling, having worked on the family farm from the age of nine, and Chouinard had similar expectations for his own life. The family prided themselves on their independence and stoicism.

When he was ten, the family moved to California, where Chouinard spent more time out of school than in it. His teenage hobbies included free diving off the Malibu coast, abseiling down cliffs, and by the age of sixteen, driving to Wyoming to go rock climbing.

In 1956, he graduated from high school and embarked on his first business venture. He bought a second-hand anvil and forge in order to make sturdier climbing equipment than the European options currently on the US market. He made and sold climbing spikes for $1.50 each, and with the profits from the sales as well as a loan, spent the next few years making hardware in the winter and climbing through the summer.

Chouinard’s aim was profoundly anti-capitalistic: he wanted to get away from corporate culture and live a simple life. When profits from the climbing equipment sales were low, he foraged in bins to collect glass bottles which could be redeemed for coins. He slept outside in a sleeping bag whenever the weather permitted it, and sometimes when it didn’t. He claims to have spent one particularly frugal summer eating cat food, and on another occasion, spent 18 days in jail on a vagrancy charge.

By the 1960s, he had recruited friends to help design and build the climbing equipment, and by 1970, Chouinard Equipment – jointly owned by Chouinard and his friends Tom and Dorene Frost – had become the largest supplier of climbing hardware in the United States. Its success, though, had environmental consequences. His hard steel pitons, which accounted for 70% of his business, were damaging the rocks that climbers so loved. Chouinard phased out production of the pitons in favour of aluminum chocks that left no scars. The product was patented in 1976.

In 1971, Chouinard met and married his wife Malinda, who charmed him with her own brand of no-nonsense environmentalism. The couple have two children, both of whom now work in the family business.

By 1972, Chouinard Equipment had morphed from a way to fund an individual’s climbing habit into a business with a global vision. On climbing trips in Britain, Chouinard came across heavy duty corduroy and rugby shirts, both of which made suitable clothing for climbers. The Chouinards and their friends created a retail store and started manufacturing garments designed to stand up to the outdoors.

Soon, the clothing arm of the business began to outpace the hardware, and Chouinard decided to name it Patagonia after a place he’d fallen in love with. Crisis followed soon after, with a surplus of rugby shirts from a Chinese factory proving to be poorly made and unsellable. It nearly bankrupted the fledgling company, and the Frosts sold their share back to the Chouinards and departed the company in the fallout.

Chouinard picked himself up and looked for other products to add to the line. They pioneered fleece jackets and thermal underlayers, both of which are now industry standard for outdoors wear shops. By the end of the 1980s, Patagonia’s turnover was close to a hundred million.

As Patagonia prospered, Chouinard Equipment declined. In 1989, a series of costly lawsuits were filed against the company for ‘failure to inform’ of safety issues relating to a climbing harness, including a suit filed by the estate of a man who had died after slipping out of a Chouinard harness. Chouinard lost the suits, declared bankruptcy and sold off the liquidated assets of the climbing gear idea.

Patagonia was still in Chouinard’s hands, though, and turnover was strong. The company made a name for itself by introducing one of the first workplace creches, ‘surfing leave’, and a hiring policy which has seen it populated with environmental idealists.

In 1994, an internal audit revealed that farmed cotton was the most environmentally damaging textile available. Although it added a substantial premium to the price of their products, Patagonia switched to organic cotton. 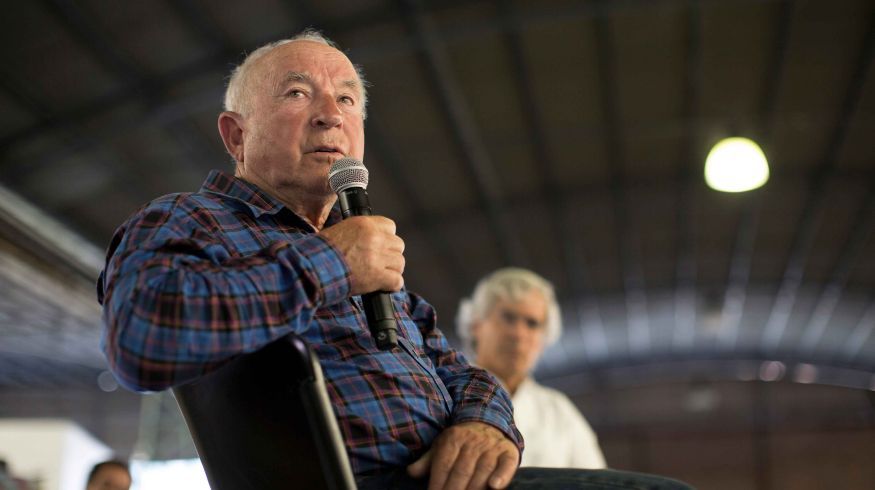 As Chouinard’s reputation has grown, other companies have hired him as a consultant to meet ethical and environmental targets. These include Walmart, Macey’s and The Gap, but Chouinard is cynical about whether he has any real influence. “Growth is the culprit,” he says. It’s the same logic that leads him to refuse to list Patagonia publicly: “It’s impossible to be a public company and be responsible,” he maintains, because the obligation to maximise shareholder profits is so starkly at odds with ethical practice.

Even nearing 80, Chouinard continues to live outside more often than in. He’s regularly to be found climbing, fishing or surfing across the globe. Together with his friend Doug Tompkins, who owned The North Face before his death in 2015, he owns vast tracts of South American rainforest in an effort to preserve the land. He established the charity ‘1 percent for the planet’, which encourages high profile companies to donate 1% of their profits towards environmental charities. The Chouinards themselves give away half their salaries to charity.

This article was written by Tanya Ashworth-Keppel on behalf of the Australian Institute of Business. All opinions are that of the writer and do not necessarily reflect the opinion of AIB. The following sources were used to compile this article: Forbes, New Yorker and The Guardian.

Ah! Corporate responsibility before it became fashionable! How refreshing!