The Graduate Management Admission Council (GMAC) recently released its 2016 Year-End Employer Poll Report, painting a picture of future hiring outlooks for business school students. The report examines hiring outcomes for MBA and masters-level business school graduates in the past year, as well as employer insights into business strategies for the coming year. They surveyed more than 140 companies of varying sizes, sectors and locations around the world, including 21 of the Fortune 100 companies. This year, GMAC reports healthy demand for recent graduates, especially MBAs, and an increase in salaries on the horizon. For a snapshot of the key findings, and what it means for MBA hiring outlooks, see below.

There is great news for MBA students and graduates around the world – results show that the MBA continues to remain relevant in today’s economy. According to GMAC, nearly all employees surveyed (96%) believe that hiring recent business school graduates creates value for their companies. Almost three quarters (71%) of these employers also indicated that recruiting such graduates is a priority for their company’s hiring plans for 2017. Organisations did, however, give one piece of advice for MBAs – ensure you differentiate yourself from the pack. A representative from a large manufacturing organisation in the United States said, “The market is increasingly competitive and graduates need to distinguish themselves beyond simply graduating”.

Projected hiring numbers on the rise

This year looks positive for job-seeking business school graduates, with a reported 83 per cent of companies planning to hire at least one. Of which, 79 per cent of employers expect to hire MBA graduates, which is 11 per cent higher than actual hiring figures for these companies in 2016. Figure 1 below dissects GMAC’s figures, placing the 2016 actual hiring outcomes next to the projected hiring outcomes for 2017. A greater share of employers (31%) also plans to hire graduates of Master in Management programmes, making 2017 a steady year for business school graduates across the board. 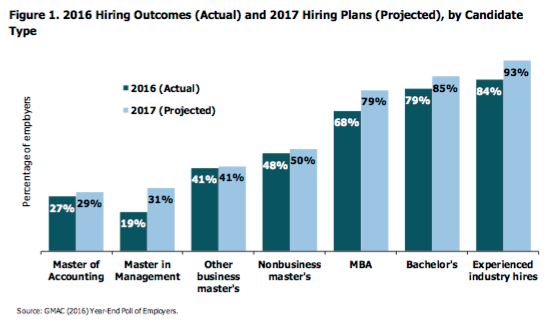 One of the top motivations for students pursuing the MBA is to achieve a promotion into a new role or an increase in salary in their current role. They see it as a means of recognising their achievement, as well as remuneration for the added value an MBA can bring to an organisation. Of those employers surveyed by GMAC who plan to hire recent MBA graduates this year, 58 per cent plan to increase their annual base salaries either at or above the rate of inflation. Of the 42 per cent remaining, 40 per cent indicate they will maintain salaries at 2016 levels – a promising rate that indicates very little decreases.

Overall, the hiring projections for 2017 business school graduates are robust, offering promising results across the board. With projected salaries stable and jobs set to increase, there seems to be no better time to pursue the MBA. Employers are seeking flexible, skilled graduates who are willing to work hard – do you fit the bill? I’m keen to hear from current students and recent graduates, to learn what they think about GMAC’s report. Comment your thoughts below!

If you’re interested in finding out more about the AIB MBA, contact us to chat with an expert Course Advisor.

This article was written by Laura Hutton on behalf of the Australian Institute of Business. All opinions are that of the writer and do not necessarily reflect the opinion of AIB.